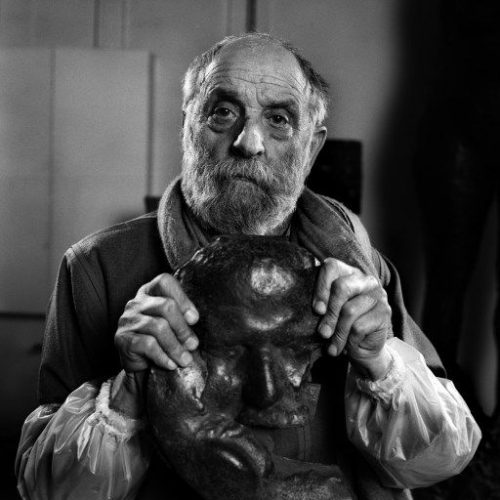 born January 1, 1921 in Marseille, and died December 6, 1998 in Paris.
Part of the New Realists movement, and world famous for being the creator of the bronze trophy for the Cesar ceremony for French cinema, to settle in Paris to be admitted, in 1943, to the École nationale supérieure des beaux-arts with Philippe Hiquily. He returned to Paris in 1946 where he occupied a workshop in a former brothel at 21 rue de l’Échaudé.
Faced with the impossibility for him to work with stone, because of its cost, he turned to other materials3. From 1947, he worked in plaster and iron. In 1949, he was introduced to arc welding in an industrial joinery in Trans-en-Provence and used lead in spun sheets and welded iron wires. In 1951, he visited Pompeii and remains marked by the casts of the bodies of the inhabitants caught in the lava3. In 1952, he used inexpensive recycled materials and made his first sculptures in welded scrap: his means were still modest. Thus, for lack of money and to afford marble, César will recover in the scrap metal dumps the materials of his first sculptures: tubes, bolts, screws which become insects or are found in the powerful curves of the Venus of Villetaneuse (1962).

In 1954, he exhibited at the Lucien Durand gallery in Paris and obtained the “collabo” prize for a sculpture entitled Le Poisson5, made in Villetaneuse, a city where he worked for a dozen years with the help of a local industrialist, Leon Jacques 6. He acquired fame when his work was purchased for 100,000 francs in 1955 by the State for the Musée National d’Art Moderne7. The same year, he exhibited at the Salon de Mai. The following year, the MNAM bought Bat from 1954 and the museum of modern art of the city of Paris Le scorpion from 1955. From 1954 (Torso, MOMA), he also made welded metal sculptures, then in partially polished bronze, of busty women (Ginette, 1958, Victoire de Villetaneuse, 1965).

In 1956, he took part in the Venice Biennale, then in the São Paulo Biennale and in Documenta II in 1959. In 1958, he signed a contract with the Parisian gallery Claude Bernard3. In 1961, he got closer to Marino di Teana and joined the group of New Realists, a movement founded by the art critic Pierre Restany8, including notably Arman, Jean Tinguely, Niki de Saint Phalle and Gérard Deschamps.

When in 1957 he was able to afford a studio in rue Campagne-Première in Paris, he married Rosine Groult-Baldaccini (he had met at the Beaux-Arts in 19489) with whom he had a daughter, Anna, a year later10. He also begins to frequent the nightlife3.

In 1968, he created at the Manufacture nationale de Sèvres a porcelain ashtray produced in 50 copies. Made of porcelain with a semi-matt pearly glaze, it represents a plaster mold used for the production of the pieces, and was produced from an original aluminum model.

In 1971, during a premiere at the Lido, he found more media than him: Salvador Dalí, the master of extravagance. He debates the same year in Italiques with François Truffaut, Lucien Bodard and Asher Ben-Natan11.

In 1976, he was the creator of the César du cinema trophy, awarded by French cinema professionals, for which he produced a bronze compression.

A man both simple and complex, with southern outspokenness, he cultivates his image as an eternal craftsman, welder and above all a great creator. The last years of his life were very good. César multiplies the exhibitions: large retrospective at the Jeu de Paume in Paris in 1997, retrospectives in Malmö, Milan, São Paulo, Mexico. Caesar ends his career with a series of portraits and self-portraits, face to face marking with death.

He shares the last ten years of his life with Stéphanie Busuttil, who today manages his work and is the holder of his moral rights.